Gold rush in the Gorge

Launceston train driver Lou Dennis prospecting for gold in the Gorge in 1937.

In March 1857 gold fever swept Launceston with hundreds of fortune hunters converging on the South Esk River at the Third Basin armed with shovels, panning dishes and high hopes.

Rumours of gold being found in the Gorge first surfaced on 12 March 1857 – The Examiner’s 15th birthday – with a brief item on Page 3: “Gold is reported to have been found near the Third Basin by two fishermen and two mechanics . . . today we believe a party goes out to test the truth of the statement.”

Claims of gold discoveries were not uncommon 160 years ago and in a decade that saw the Victorian and Californian gold rushes any new rumours spread quickly.

Most turned out to be false claims. Gold had been discovered near Beaconsfield a decade earlier but at the time didn’t turn out to be the bonanza many hoped.

According to the Cornwall Chronicle the latest gold find was attracting all sorts to the Third Basin where a century later the Trevallyn Power Station dam would be built.

“Bankers, merchants, millers, mechanics, labourers and idlers all rushed across the river in the punt to the West Bank of the Tamar to ascertain personally the truth of some rather exaggerated statements which were in circulation, respecting the gold discovery.”

The Examiner advised caution but undertook to substantiate the claims.

“We mentioned in our last issue that a report was in circulation in town that gold had been found near the Third Basin. The experience of former rumours of a similar character, induced a considerable degree of scepticism on the subject but we are now in a position to confirm positively the truth of the statement.”

There were only 20 people digging for gold when The Examiner’s reporter visited the site on that Thursday, but by Saturday there were more than 40 prospectors at work and some were only too willing to show off the gold they had found.

“Nearly every dish of stuff yielded some specks of gold, and in one case a few pieces of the size of small shot were found; in another the pieces were the size of flattened pins heads.”

Veterans of the Victorian gold fields dismissed the discoveries as not worth the effort of a trip up to the remote section of the South Esk River even though it was only five miles from town but that didn’t deter hundreds of hopeful prospectors.

The big question posed in the newspapers was “where did the gold come from?” The Examiner suggested a more scientific approach was needed to substantiate the finds.

“No attempt was made yesterday to solve the interesting problem as to the origin of the gold -- a second examination leads rather to the opinion that the gold found amongst the rocks has been deposited by water from the hills, or it may be by the river entering the flat higher up.”

There was speculation that the gold had come from far away and had been washed into the Gorge by floods in recent times and the current dry conditions had left the riverbed greatly exposed.

The Examiner suggested the sending out of exploring parties under the guidance of qualified geologists.

“It is idle to waste time on a few yards of rock, when a search in another locality may disclose a matrix or richer deposit of the precious metal. The country on the western side of the river has been traversed only by bushmen; and a proper geological survey might prove a useful and economical investment.”

In a letter to the Cornwall Chronicle Launceston merchant William Cleveland suggested the gold had not been brought by the South Esk from Fingal or by the Meander from the Western Ranges but was from a much closer source.

“My impression is still that the gold comes from hills lying somewhere between Pleasant Hills and Westbury, and it is reported that there are quartz-capped hills in that direction. The Supply River ought also to be searched, and even Stoney Creek, and Muddy Creek, were so little is known of the country.”

A correspondent to The Examiner, W. F. Green, believed that Launceston was on the eve of great prosperity as the South Esk had “yielded a fine starting point for the discovery of a payable gold field.”

Mr Green wanted the residents of Launceston to “raise a subscription immediately for the fitting out of prospecting parties, under efficient leaders”, men who have had experience on the Victoria gold fields.

“I have traversed the northern side, from the Third Basin, and for six miles saw none but ironstone ranges; therefore I would recommend that a party start from Launceston to Deloraine, thence take a north-north-easterly direction towards the Supply River.

“Between Deloraine and the Supply River they will find quartz ranges; then the plan to adopt is to follow south-easterly till they come to the South Esk River side. If quartz ranges happen to be on the side of the river, then the probability is that they are within a hill or two of a payable gold field.”

There were still some hardy gold hunters at the Third Basin a month later but interest was rapidly waning.

The Cornwall Chronicle of 22 April 1857 said the official return for the past week showed that 18 diggers were still at work on the South Esk but had only procured three and a quarter ounces of gold.

“This is not very encouraging but the most experienced diggers are away prospecting in other directions. Mr Hoyle started for Perth on Monday, with the intention of carefully prospecting the banks of the river, its tributaries, and the gullies running in to it and also the adjoining country round to the Third Basin.

“Mr Bellion Snr is at work on the bank of the river and is securing sufficient gold to pay expenses. Mr Townsend has gone out to drive in at the side of a hill where he has good reason to believe all the gold found near the Third Basin has been washed from.

“Mr Percy, formerly of the Lyceum Theatre, has sunk a hole 70 feet deep . . . he found specks of gold all the way down, but has been compelled to give up the search on account of the heavy expenses attending the working of a hole at such a depth.’

By the end of 1857 the gold, and the interest, in the South Esk had petered out although gold prospectors were busy elsewhere in Tasmania, particularly in the North East and West Coast.

It would be another 20 years before the rich reef of gold near Beaconsfield was discovered and large-scale gold mining really commenced in Tasmania.

Over its life the Tasmania Gold Mine at Beaconsfield produced nearly 2 million ounces of gold.

The construction of the Duck Reach Power station in the 1890s no doubt changed the water flows in the South Esk below the Third Basin but the river wasn’t entirely abandoned by prospectors.

Retired Launceston fireman and former railway worker Lance Carroll says that men were still prospecting for gold there in the 1930s.

He says that when train driver Lou Dennis (pictured above) wasn’t working with the Tasmanian Railways he was prospecting for gold often with his father Jack in the Gorge, and other places, and taking photos,.

“Lou took a large number of photos in the 1930's. How he managed to get to some of these places I don't have a clue.

“Lou never owned a car and couldn't drive one. I would pick him up at all hours of the day and night when I worked with him as my engine driver on locos out of the Launceston Roundhouse between 1951 and 1964.”

How successful Lou Dennis and his fellow gold prospectors were is unclear but the construction of the Trevallyn Power Station in the early 1950s brought an end to gold panning at the Third Basin.

BELOW: Windy Bill, Jack Dennis and Lou Dennis prospecting for gold in 1937. 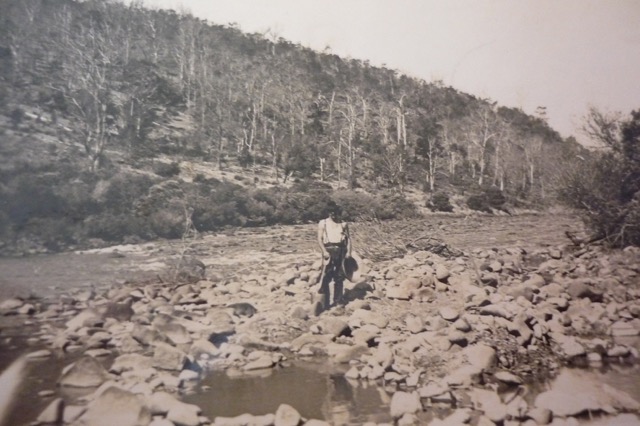 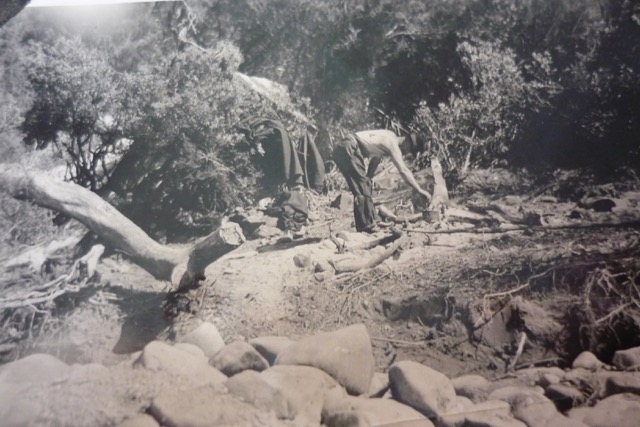 Home of Peace, the Eskleigh Story

Sounds of the Tamar estuary

When F. and W. Stewart brought a touch of Tiffany's to Launceston